Home Dementia What are the 7 stages of Frontotemporal Dementia? 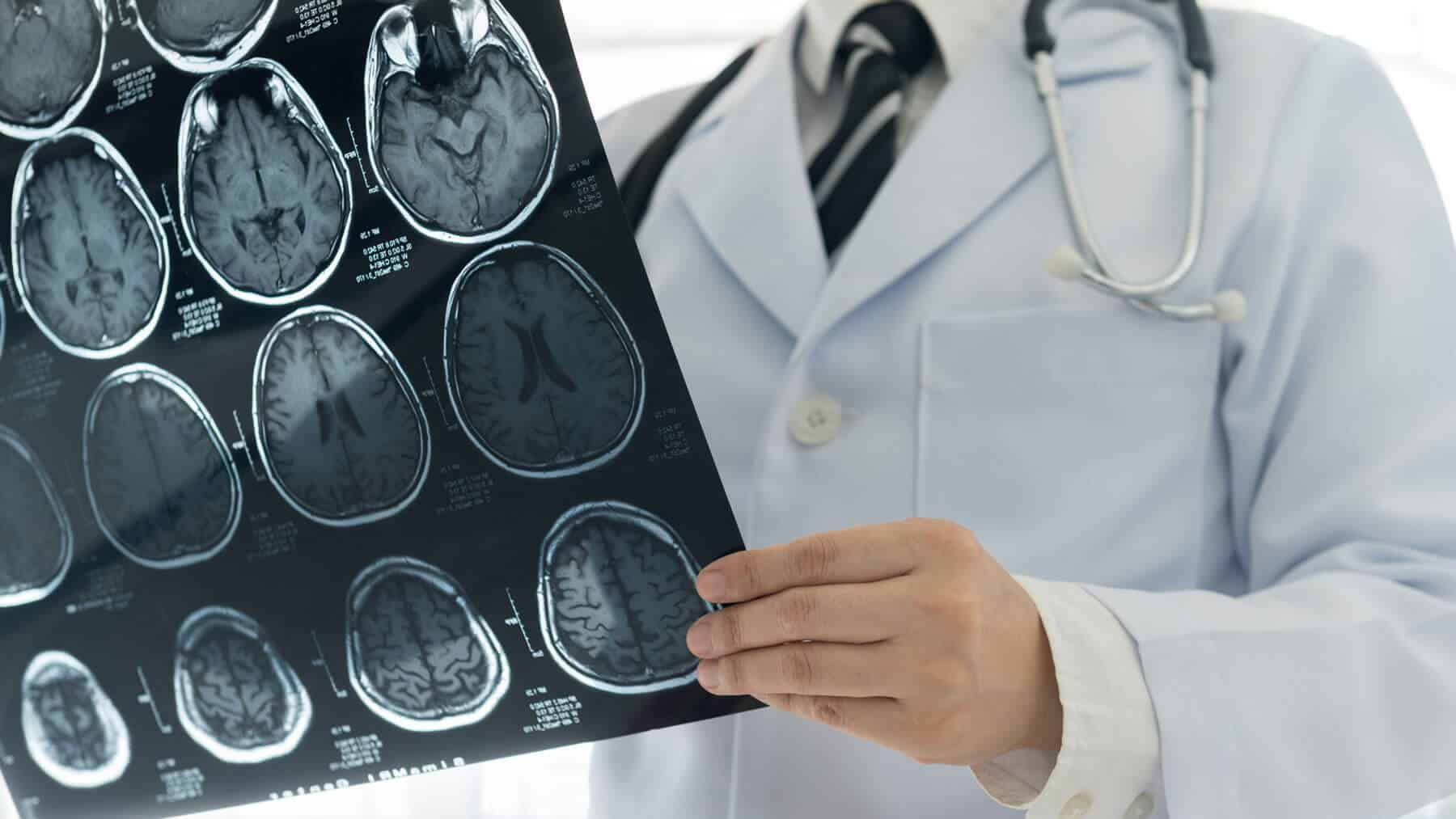 Dementia encompasses a group of symptoms that progress over varying periods of time. The condition causes cognitive impairment, particularly problems with thought, memory, and reasoning. This can impact personality, mood, and behaviour, but it also makes daily living much more difficult.

Frontotemporal dementia (FTD) primarily affects functions such as speech, language, and behaviours, and in later stages, it progresses to movement problems. In this article, we’re going to talk you through the seven stages of FTD, shining a spotlight on the symptoms and how the disease progresses over time, and what sort of dementia treatment options are available to help manage symptoms.

What is frontotemporal dementia?

Frontotemporal dementia is one of the more uncommon types of dementia. Unlike other types, such as Alzheimer’s disease and vascular dementia, FTD tends to be diagnosed earlier on in life, with people aged 45-65 being mostly impacted.

It is caused by a buildup of proteins in the frontal and temporal lobes of the brain. These parts of the brain control language and behaviour, and as such, people with FTD tend to experience symptoms relating to speech and behaviour.

It’s not fully known what causes FTD, but approximately one in eight people with it have family members who also had it, so researchers believe there’s a genetic element to it.

There are a number of symptoms of FTD that develop over time, with the most common being:

There isn’t a single test that can diagnose FTD; instead, a GP will assess symptoms with the help of someone who knows the patient well. There will typically include asking about any behavioural changes, doing some mental capability tests, blood tests, a lumbar puncture (to rule out Alzehiemer’s and other conditions), and brain scans such as MRI, CT, or PET scans.

Genetic tests can also be done to determine your family history and see if you’re at risk.

There are treatment options that can help mitigate the symptoms of FTD early on, such as medication to control behavioural changes and different types of therapies to help with speech and movement, but carers tend to be needed in the later stages as patients lose the ability to look after themselves.

FTD develops over time across seven distinct stages. Not everyone will reach stage seven, and some people spend years at one stage before progressing to the next, whereas others progress more quickly. Below are the seven core stages of FTD.

Early stage frontotemporal dementia is very, very subtle in the majority of cases. Many people and even those close to them do not recognise any particular symptoms they would be worried about. That being said, some mild cognitive changes may occur in the form of unusual actions or anti-social behaviour, and people may also demonstrate issues with speech or putting sentences together correctly at this early stage. While it’s less common with FTD, some will experience memory issues.

However, those with early-stage FTD often do not attribute behaviours and instances to a neurological condition. At this stage, a person’s quality of life isn’t drastically impacted.

2. Changes in Behaviour and Sharpness

The second stage of FTD is still very early in the condition’s progression and may only display mild changes. As with lots of diseases that affect the behaviours and nuances of a person’s personality, most wouldn’t attribute it to a medical issue. As people get older, it’s not uncommon for them to stumble over their words, struggle with phrases, or even forget things, so dementia in all forms can be difficult to pick up on in the early stages.

However, those close to someone with FTD may well notice subtleties in their behaviour and overall sharpness. For example, some find it difficult to find the right words to say at times, whereas others lack the cognitive thought to substitute one word for another. While this may be frustrating and worrying. Such difficulties at an early stage (if noticed) can be crucial in recognising FTD. Additionally, unusual or anti-social behaviour can begin to impact a person’s social and professional life.

The middle stages of frontotemporal dementia are where symptoms become more consistent and recognisable and begin to accelerate in severity. Those with FTD may also develop more substantial language variants at this stage. This tends to begin with forgetting more advanced terminology and less commonly-used phrases, which in turn can have an impact on the career of those who use more advanced language on a daily basis. Generally, the person will not be able to notice these symptoms, and they’ll be more apparent to those around them.

Language difficulties, combined with unusual behaviours, lack of inhibition, and a lack of social tact, can point towards FTD at this stage. Unfortunately, they feed into one another as the use of appropriate and effective language is key for social situations and productive work life. For some, the early and mid-stages of FTD are where their home and work life begin to decline.

4. Implications on Quality of Life

Stage four of frontotemporal dementia displays symptoms that have more impact on a person’s quality of life and also the way they interact with others. The progression of language problems can make it more difficult for someone to remember and use simple phrases, such as familiar terminology and the names of everyday items. Compared to more complex language, forgetting simple words is much more noticeable to others.

Some FTD patients begin to display more typical dementia symptoms at this stage, such as forgetfulness and difficulty with everyday tasks. While this is not always commonplace, the combination of language problems, behaviour variants, and memory issues make life extremely difficult. It’s not uncommon for someone with FTD to lack the ability to recognise their own issues and want to deal with them.

Tasks such as driving and spending time in unfamiliar surroundings can prove to be problematic if a person forgets essential information and lacks the social/language skills to seek help.

Stage five FTD is considered to be one of the mid-to-later stages and can reflect more significant impacts on a person’s quality of life. It can also begin to demonstrate similarities to typical Alzheimer’s symptoms, as cognitive impairment such as language and problem-solving issues can be additionally affected by memory problems. For this reason, a person with FTD may find it difficult to carry out everyday tasks and make decisions, especially important life decisions such as healthcare.

In this stage, the symptoms can be vast and varied. Typically, a person can experience personality changes and mood swings, but more severe than the subtle behaviours they displayed earlier on. Maintaining conversations and using speech to conduct daily activities and solve problems can become near impossible. For this reason, late-stage FTD often requires a friend or family member to support and care for various tasks.

In addition to cognitive issues, frontotemporal dementia can also cause motor impairment, such as stiffness and an inability to use certain parts of the body. An example is an ability to swallow or drink fluids. In some cases, behaviour and memory issues cause people to act unexplainably and do things they are unaware of.

At stage six of FTD, people suffering from the condition can appear similar to those with dementia due to Alzheimer’s. Language and behaviour are significantly affected, and the inclusion of memory deterioration leads to serious mental decline. Those at this stage can appear to be locked inside themselves and have minimal output, be it emotional, physical, or verbal.

Late-stage frontotemporal dementia can also present motor issues, including balance and reflexes. This means that falls and accidents can be common, which are exasperated by the decline in aspiration and unusual responses to daily occurrences, let alone traumatic events. If someone with FTD suffers an injury during a fall, it can be hard for them to recover mentally and lead to the permanent use of wheelchairs and other equipment.

When it comes to everyday life, someone with late-stage FTD suffers a severe mental and physical decline. Everyday tasks such as dressing, washing, eating, and moving tend to require the help of another person. For this reason, later-stage dementia requires people to receive constant care at home or be situated in a specialist care home.

Stage seven is the final and most advanced stage of FTD. At this point, living alone is almost impossible and patients experience severe cognitive impairment and decline. As there is no cure for frontotemporal dementia — only treatments to ease symptoms — a person will continue to decline in a range of ways. While this tends to be a consistent decline of the symptoms they have displayed throughout the seven stages of frontotemporal dementia, some can suffer from additional and more severe symptoms later on. For example, if someone has primarily suffered from speech and motor issues throughout, later stages may now impact their memory and other mental factors.

FTD is not fatal on its own; however, it can lead to an increased risk of illness that is very serious at stage seven. A common example is pneumonia, the most common cause of death with FTD. Also, as FTD makes people more vulnerable to falls and accidents, from which it’s substantially more challenging to recover, and can lead to fall-related injuries and deaths.

If you or someone you know is showing signs of frontotemporal dementia or has been diagnosed and requires additional insight, the experts at our leading London private memory clinic can help. We have years of experience in dealing with FTD and can provide a fast diagnosis and bespoke treatment plan, making use of our state-of-the-art facilities and access to things like clinical trials not available on the NHS. We offer rapid testing and lots of different treatment options, including medication, speech therapy, physiotherapy to help with physical symptoms, and support for relatives of those with FTD.

Please get in touch with our helpful team of specialists to discuss your options and the next steps.

Previous Post What are the 5 stages of Parkinson’s Disease?
Next Post What is the difference between Alzheimer’s and Dementia?